Tit is the most extraordinary summer i can remember. The day monsoon rains shattered my tomato plants to shreds was followed by a day so hot and dry that I could barely muster the energy to throw a salad. This is arguably the future that will keep those of us who not only cook seasonally but also weatherproof, on our toes. (Last week we switched from tomato salad in the garden to cake and mashed potatoes by the fire in 24 hours.) I’m getting used to not planning my next meal in advance. Cooking in this crazy, unpredictable weather takes a certain amount of spontaneity.

The other day there was a tray with sardines at the fishmonger’s – silver, black and gold with jewel-shining eyes. An all too rare sighting of a seasonal fish that I first met as a child, hidden in golden cans of tomato sauce that you opened with a small metal key. Then we ate them on toast for tea.

As a child I got to know sardines for the first time, hidden in golden cans with tomato sauce that you open with a small metal key

A few summers ago I was cooking sardines on an improvised grill on the banks of the Douro – one piece of fish at a time, ate it with thick bread and white port wine glasses. I baked them at home, rolled them around a crumb and herb filling, with their pointy tails high like sails on a toy boat, and devoured them straight from the can.

This time I asked the fishmonger to smack them – open the fish flat and remove their backbones – so I could bake them, covered with a layer of crumbs, herbs and lemon zest. We ate it with a tomato salad, the fruit sliced ​​and dressed with olive oil and chopped oregano.

The other short-season find this week was tiny figs the size of golf balls. Ripe but not quite ready to eat, they came at a bargain price and were just the size to be packed tightly in a storage jar. Up close they were beautiful, their cut sides pressed against the glass, bay leaves and sprigs of thyme jostling among the fruits all the while soaking them in white wine vinegar, fennel seeds, and allspice.

The first figs only took a few days to pickle – we took them from their pink liquor to eat with cheese, then found they added shine to a salad of air-dried ham and watercress. I also like to hide a jagged piece of blue cheese – Picos, Stichelton or Roquefort – in the shabby hollow of every halved fruit: a shimmering touch of salty acidity against the crunch of the fig kernels.

There is also more. After the figs were eaten, we were left with the most beautiful vinegars. Fruity and slightly aromatic, we used it to dress a salad made from lettuce and cress leaves. The rest is sealed and kept for later.

These pickled figs are handy to keep handy and go particularly well with creamy cheeses, the kind with golden curd that oozes out when cut. I also like them thinly sliced ​​in cheese sandwiches instead of fruit chutney. They can be kept for several weeks if required. Choose fruits that are small and just ripe (too soft and they’ll get mushy in the hot brine). Makes 1 x 500g storage jar

You also need a sealed storage jar for 500 ml.

Pour the white wine vinegar into a medium-sized, non-reactive saucepan (stainless steel or enameled cast iron) and set it over a moderate heat. Add sugar, fennel seeds, allspice, peppercorns and bay leaves and bring to the boil.

Cut the figs in half, removing any stiff stem ends, and then packing them in the storage jar. Tuck the bay leaves and thyme sprigs between the figs, then carefully pour the hot pickling liquid over the figs (a funnel is useful here). Close tightly and let cool. Store the figs for a day or two before eating. 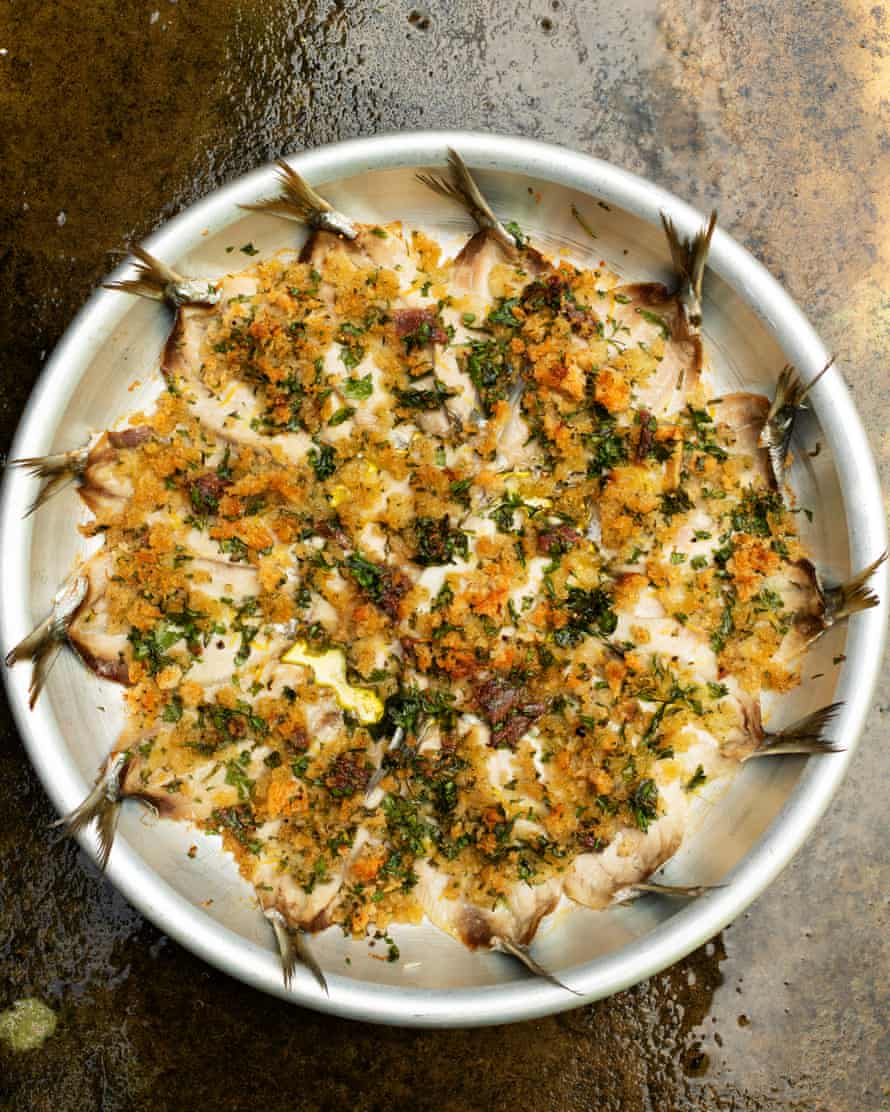 “Ask the fishmonger to turn the sardines into butterflies, but give them an appropriate warning”: baked sardines with breadcrumbs. Photo: Jonathan Lovekin

Ask the fishmonger to smack the sardines with butterflies, but give them adequate warning. If you want to cook them yourself, lay the gutted fish, skin side down, flat on a work surface. Holding the tail with your fingers, use scissors to cut through the spine at the head end, and then gently pull – the bone will separate from the flesh. Cut through the bone near the tail and remove the backbone. Carefully check for stray bones and then move on. The breadcrumbs can be prepared with sourdough or white bread. I use two-day-old bread, which crumbles more easily than freshly baked bread. For 4

Preheat the oven to 200C / gas mark 6. Make the crumb crust. Crush the bread in the food processor or with a coarse-toothed grater into coarse crumbs. Remove the parsley leaves from the stalks and roughly chop, then stir into the breadcrumbs. Finely chop the rosemary leaves. Dab any salt crystals or oil from the surface of the anchovies with kitchen paper and chop finely. Stir into the breadcrumbs together with the rosemary and a little salt and black pepper. Finely grate the lemon peel, then mix with the oil and crumbs.

Drizzle some olive over the crumbs and fish, then bake for 20 minutes until the crumbs are golden brown

Moisten the baking dish with a little oil. I use a 28cm metal baking pan, but any flat ovenproof pan will do.

Place the butterfly sardines on the baking dish in a single layer, slightly overlapping each fish and with the tails facing out. Lightly sprinkle the seasoned crumbs over the fish. Drizzle some olive over the breadcrumbs and fish, then bake in the preheated oven for 20 minutes until the breadcrumbs are golden brown. Serve immediately while the small fish are still hot.

Ignore these 3 tips he gives on saving for retirement